A bronze tint to the upper leaves is a distinctive feature that helps separate Bugle from most other members of the Mint family.

Stems have a square cross section, hairy on just two opposing sides; they bear pairs of opposite oval leaves that are unstalked apart from a basal rosette of leaves which have short stalks. The blue-violet flowers are typically 1.5cm long and have a pattern of veins on the lower lip.

Bugle can grow up to 20cm tall but is often little more than half that height. The plants propagate mainly by growing surface runners (which are known as stolons) that root at intervals along their length.

Unlike its close relative Pyramidal Bugle Ajuga pyramidalis, this plant is common throughout Britain and Ireland and is found also across much of mainland Europe. 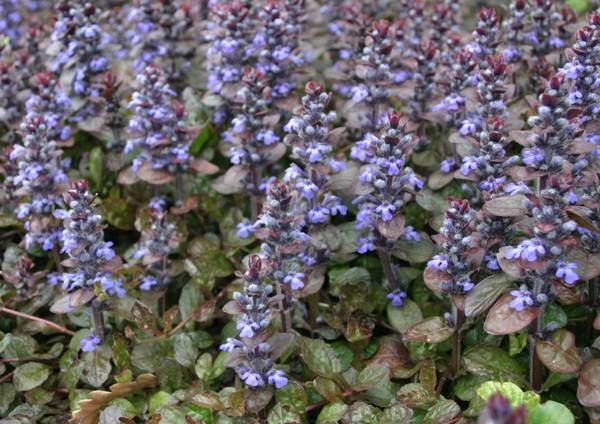 In Britain the first flowers usually appear in April, and Bugle continues blooming until late June or early July. The lips of the flowers are veined with darker blue. 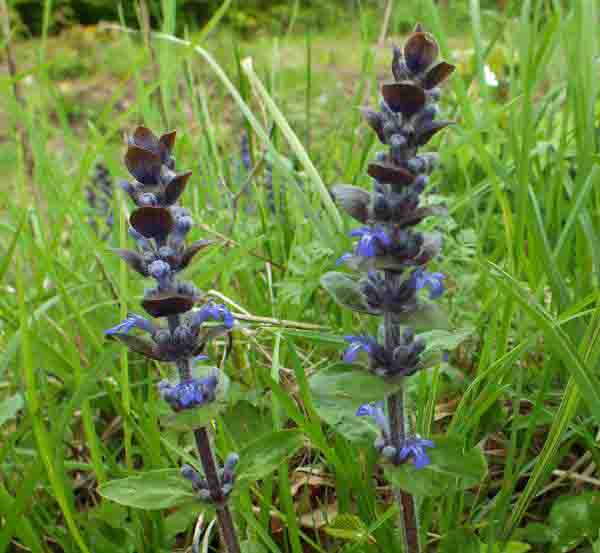 (We strongly advise against eating or using as medicines any plants without first obtaining qualified professional advice.)

Ajuga, the genus name, comes from Greek and means 'without a yoke'. The specific epithet reptans means creeping (like a reptile).

The plants shown here were photographed in South Wales and in France in early spring.