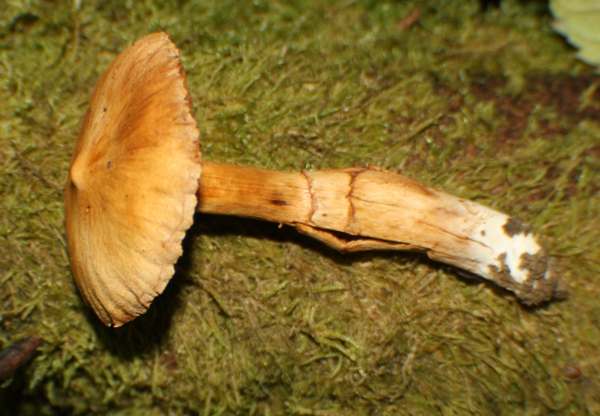 Cortinarius hinnuleus is one of the many brown webcaps found under broadleaf trees. The identification of this undistinguished mushroom is eased somewhat by its habitat needs: damp woodlands with willow or poplar trees.

An occasional species in Britain and Ireland, the Earthy Webcap is also found throughout much of mainland Europe and in parts of North America.

When in 1798 British naturalist James Sowerby (1757-1822) described the Earthy Webcap he gave it the binomial scientific name Agaricus hinnuleus. (Most gilled fungi were initially placed in a giant Agaricus genus, now redistributed across many other newer genera.) It was the great Swedish mycologist Elias Magnus Fries who, in 1838, transferred this species to the genus Cortinarius, whereupon it assumed its currently-accepted scientific name Cortinarius hinnuleus.

The generic name Cortinarius is a reference to the partial veil or cortina (meaning a curtain) that covers the gills when caps are immature. In the genus Cortinarius most species produce partial veils in the form of a fine web of radial fibres connecting the stem to the rim of the cap rather than a solid membrane.

The specific epithet hinnuleus means tawny-cinnamon coloured (the colour of a young hide or fawn).

This mushroom is generally regarded as poisonous and it should not be gathered for eating. (Some brownish Cortinarius species contain the toxin orellanine, which if eaten destroys human kidneys and liver.)