This tiny white-capped pinkgill is very common in pastures, in grassy and mossy areas under broadleaf trees in parkland, and in or on the edges of open deciduous woodland. Cream Pinkgills are often ignored, as they are easily mistaken for the much more common Snowy Waxcaps when seen from a distance. 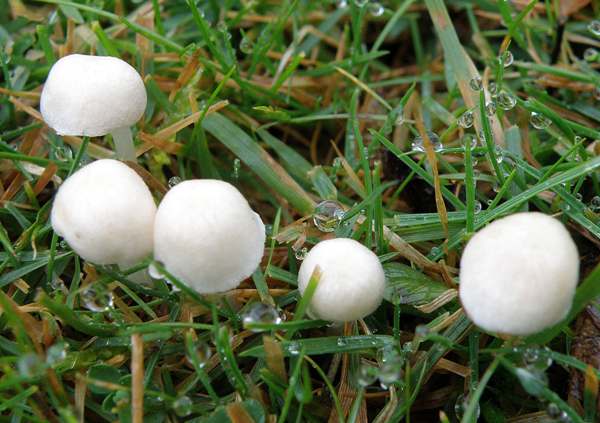 Although mainly seen as singletons or in small groups, Cream Pinkgills occasionally appear in arcs or in complete fairy rings.

When in 1818 the Swedish mycological pioneer Elias Magnus Fries described this pinkgill mushroom he gave it the name Agaricus sericeus ß sericellus. It was the German mycologist Paul Kummer who in 1871 transferred this species to the genus Entoloma, thereby establishing its currently-accepted binomial name as Entoloma sericellum.

The generic name Entoloma comes from ancient Greek words entos, meaning inner, and lóma, meaning a fringe or a hem. It is a reference to the inrolled margins of many of the mushrooms in this genus.

The specific epithet sericellum refers to the silkiness of the cap surface, although this feature is unreliable as some specimens have very smooth caps.

Reported in some field guides to be inedible and perhaps suspect, Entoloma sericellum is in any case insubstantial and of no culinary interest.