Exidia glandulosa - often referred to as Black Witch's (or Witches') Butter, perhaps because of its butter-like consistency and greasy surface when wet as well as its sombre colour, occurs throughout the year on dead hardwood.

An alternative theory for the origin of the common name of this fairly common jelly fungus is that this species was thought to have the power to counteract witchcraft if the fruitbodies were thrown on to a blazing fire - probably not instead of the witches, I fear!

In wet weather Exidia glandulosa turns black and jelly like; however, during prolongued dry spells it shrinks to a series of cone-shaped olive-brown crusts. The individual fruitbodies sometimes coalesce to form larger blobs.

Tremella mesenterica (above), generally known as the Yellow Brain Fungus, is also (confusingly) referred to by some authors as Witches' Butter - further justification for using (or at least always including) the scientific name when making a reference to a particular fungus species.

Autumn and winter are the best times to look for both of these jelly fungi (and indeed most other jelly fungi), even though they can fruit at any time of the year.

Exidia glandulosa occurs throughout Britain and Ireland, where it is no more than a fairly common find. This fungus can be seen also in many countries on mainland Europe. On a worldwide scale the distribution of Exidia glandulosa is unclear and probably inaccurately recorded, partly because this species was not clearly separated taxonomically from the macroscopically similar Exidia plana until the late 1960s, and even nowadays misidentification is not uncommon. It is quite likely that this jelly fungus is widely distributed throughout the northern hemisphere; it is certainly reported to be widely distributed in North America. 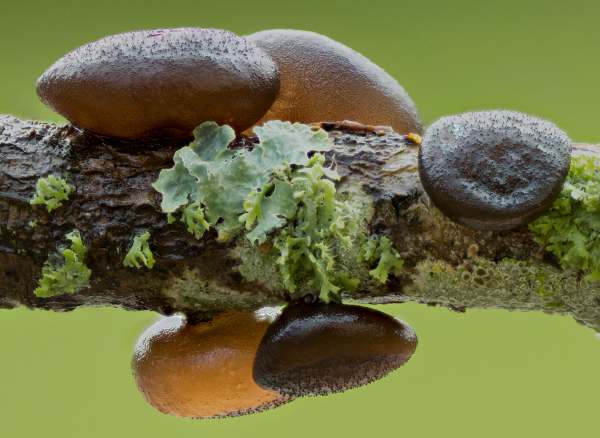 The taxonomy of this jelly fungus is unclear, and some authorities still place it in the order Tremellales. In the USA the genus Exidia is placed under the family Auriculariaceae rather than, as in Britain, Exidiaceae.

The fungus that we know as Witches' Butter was originally described in 1789 by the French naturalist Jean Baptiste Francois (Pierre) Bulliard, who gave it the scientific name Tremella glandulosa. Then in 1822 the great Swedish mycologist Elias Magnus Fries transferred this species to the genus Exidia, but unfortunately Fries used the name Exidia glandulosa to cover not only Witch's Butter but also the jelly fungus that we know today as Exidia plana. The separation of these two species was finally clarified by Dutch mycologist Marinus Anton Donk (1908 - 1972) who in 1966 redefined the Exidia genus, clearly differentiating between Exidia plana and Exidia glandulosa.

Exidia glandulosa is the type species of the genus Exidia.

Exidia, the generic name, means exuding or staining, and both seem appropriate because these jelly fungi do look like exudations when moist and like dark stains on wood when they dry out. The specific epithet glandulosa comes from Glandul- meaning gland, and the suffix -osa meaning abundant - a reference to the abundance of glands (papillae) on the surface of the fruitbodies of this jelly fungus.

This jelly fungus is of dubious edibility, and in any case it is too insubstantial to be worth collecting for food. We therefore - Class it as being of no culinary value. 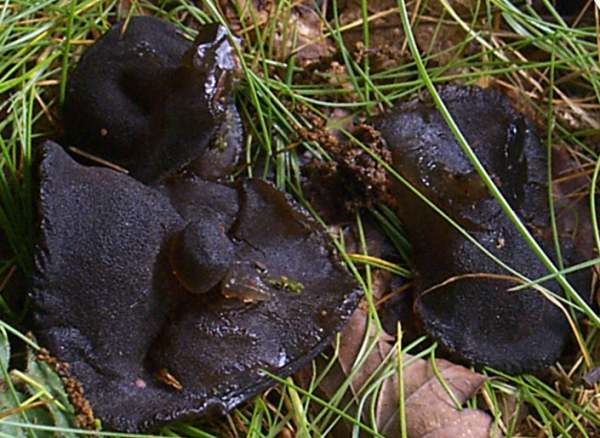