Appearing under birch trees, sometimes together with the Brown Birch Bolete Leccinum scabrum, Leccinum holopus is commonly known as the Ghost Bolete. Its whitish form is most distinctive.

A rare find in most areas but nevertheless widely distributed in Britain and Ireland, the Ghost Bolete occurs throughout most of mainland Europe, from Scandinavia right down to Portugal, Spain and Italy provided there are birch trees present. (Above: old specimens, central France.)

Leccinum holopus has also been recorded from many parts of North America. 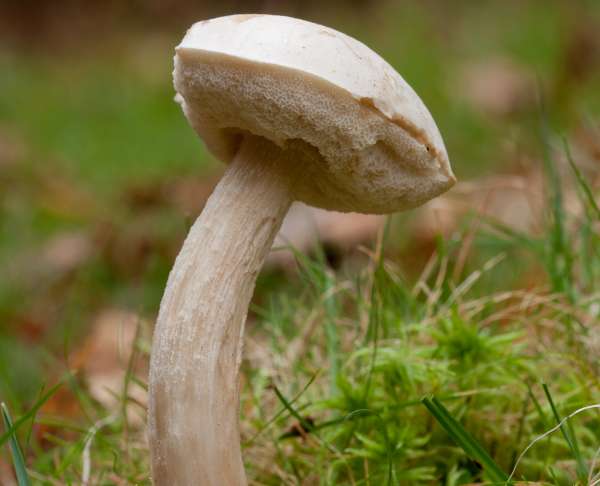 The Ghost Bolete was described in 1844 by German mycologists Friedrich Wilhelm Gottfried Theophil Rostkovius (1770 - 1848), who gave it the binomial scientific name Boletus holopus. The currently-accepted scientific name Leccinum holopus dates from a 1960 paper by British mycologist Roy Watling, published in the Transactions of the British Mycological Society.

Leccinum, the generic name, is derived from an old Italian word meaning fungus. The specific epithet holopus comprises the prefix holo- meaning whole or entire, and the suffix -pus meaning foot, stalk (stem) or base.

Leccinum holopus is generally considered to be a good edible mushroom and in places where it is plentiful this bolete is sometimes used in recipes that call for Ceps Boletus edulis (although in both flavour and texture a Cep is superior). Alternatively, use Ghost Boletes to make up the required quantity if you do not have sufficient Ceps. Across most of Britain and Ireland the Ghost Bolete is a rare find, making its collection for anything other than serious scientific research quite inappropriate.