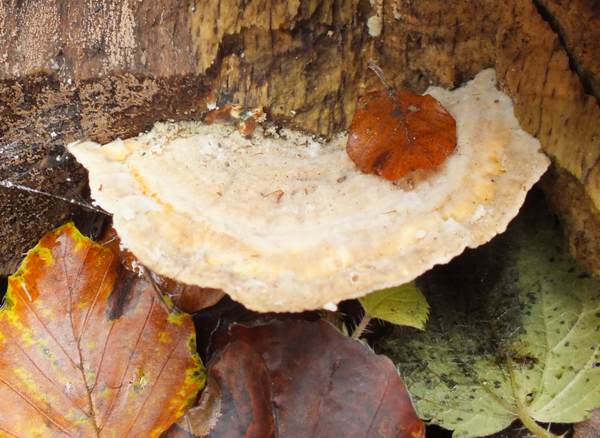 From the top this attractive bracket is easily misidentified. There are so many colour variations in Trametes versicolor that it is almost forgivable to assume that any fan-shaped thin bracket with concentric, many-zoned bands on its upper surface must be yet another Turkeytail. No so! Just as variable in colour as Trametes versicolor is this thin and leathery fan-like bracket, again with many concentric colour bands, but there is one very important feature distinguishing it from Turkeytail... it has gills.

To spot the difference between Lenzites and Trametes, you have to look on the underside of a bracket. Lenzites betulinus has definite gill-like slots rather than pores. They aren’t merely very long mazegill slots either, but structures very similar to the gills of an agaric mushroom. The Birch Mazegill is, nevertheless, a polypore – taxonomically, that is!

An uncommon but conspicuous bracket fungus, the Birch Mazegill is found occasionally throughout Britain and Ireland.

In 1753, when Carl Linnaeus described this bracket fungus, he gave it the binomial scientific name Agaricus betulinus. The great Swedish mycologist Elias Magnus Fries transferred this species to the genus Lenzites in 1838, and Lenzites betulinus is still generally-accepted scientific name today.

Lenzites, the genus name, was established in 1835 by Elias Magnus Fries, perhaps honouring German mycologist Harald Othmar Lenz (1798 - 1870). The specific epithet betulinus means 'of birch trees' - a reference to the genus of host trees upon which this bracket fungus is most commonly found.

The Birch Mazegill is tough and inedible.