Only an occasional find in broadleaf and mixed woodland, the Hare’s Ear fungus often fruits in small clustered groups, as shown here. Its conspicuously bright colour makes this an easy-to-spot fungus despite its moderate size.

There is something special about footpaths through woods that suits these are other ear- and cup-like fungi. Perhaps the change in soil density due to compaction causes them to fruit right on the edges of such well-trodden tracks.

Common and widespread throughout Britain and Ireland, particularly in broad woodlands but also occasionally beneath conifers in mixed woodlands, Otidea onotica is found throughout most of mainland Europe. Hare's Ear fungus occurs also in many parts of North America.

In 1801 when Christiaan Hendrik Persoon described this ascomycete fungus he gave it the binomial scientific name Peziza onitica. It was the German mycologist Karl Wilhelm Gottlieb Leopold Fuckel (1821 - 1876) who in 1870 transferred this species to the genus Otidea, renaming it Otidea onotica, its currently accepted scientific name.

The genus name Otidea is a reference to the ear-like form of fungi in this group, while the prefix ono- in the specific epithet onotica means donkey. Well, Donkey-ear Fungus seems to me no better or worse a descriptive term than Hare's Ear fungus. (Another of the common names used in the past when referring to this species is Lemon Peel Fungus.)

Otidea onotica is generally regarded as inedible. In Wild Edible Fungi: A Global Overview of Their Use and Importance to People by E. R. Boa, this species is listed as being 'either edible or of medicinal value'. 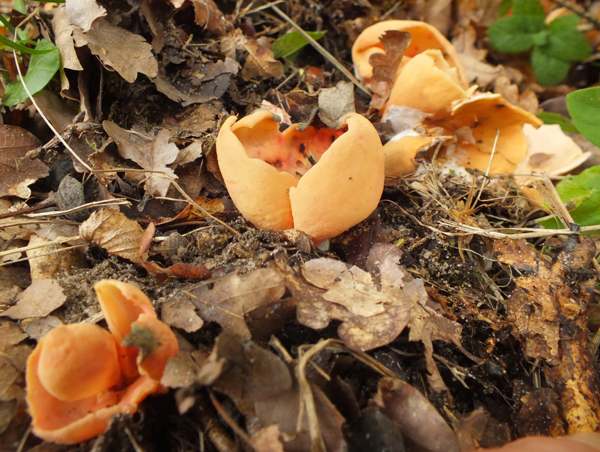 Boa, E R (2004). Wild Edible Fungi: A Global Overview of Their Use and Importance to People. FAO of the UN.