Few of the polypores can honestly be described as beautiful, but when you come across young fruitbodies of Trametes pubescens on a nice sunny day you may well agree that they look absolutely gorgeous in their white velvet gowns. Unfortunately these brackets soon lose their pristine appearance, developing brown radial lines and deep furrows near the margin on the upper surface and a yellowish tinge to the fertile underside. Aged specimens are often devoid of the velvety coating and hence more difficult to identify.

In Japan this bracket fungus has reportedly been prescribed as an adjunct to other treatments for cancer of the colon. 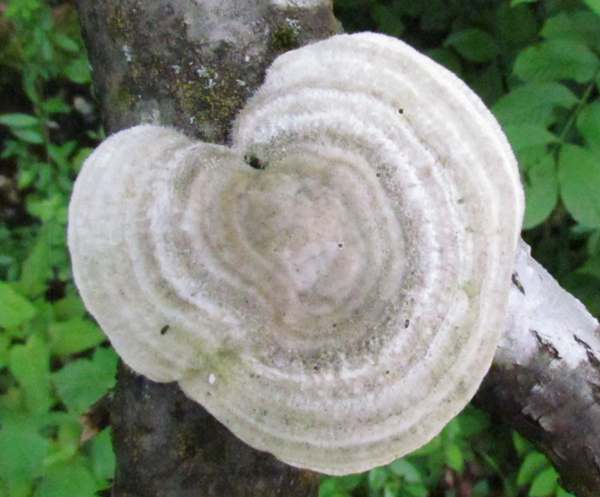 Rather an uncommon species in Britain and Ireland, this pretty polypore is more plentiful in central mainland Europe and is also a frequent find in most parts of North America.

Described scientifically in 1803 by the Danish mycologist Heinrich Christian Friedrich Schumacher (1757 - 1830), who gave it the binomial scientific name Boletus pubescens (at a time when anything with pores was placed in the Boletus genus, later redistributed across several other new genera), this species was renamed Trametes pubescens in 1939 by the Czech mycologist Albert Pilát (1903 - 1974).

Trametes, the genus name, comes from the prefix tram- meaning thin - hence the implication is that fruitbodies of fungi in this genus are thin in section.

The specific epithet pubescens is a reference to the fine downy hairs on the velvety upper surfaces of young brackets of this species.

Although not generally reported as poisonous, these bracket fungi are too leathery to be considered edible.