This is the largest of the three newt species found in the wild in Britain and also the one most severely threatened by habitat loss and pollution.

Great Crested Newts grow up to 15cm long and they look much more 'chunky' than either the Common Newt or the Palmate Newt. Their skin is also darker - on top it is either dark brown with blackish spots or, occasionally, completely black - and it is much rougher and more warty then the skin of the other newts. The underbelly of a Great Crested Newt is orange with with black spots, and on its lower flanks it is stippled with small white dots. The females are slightly larger than the males on average. 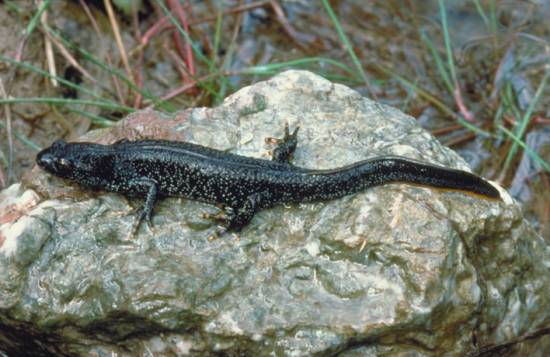 Although these newts are called 'crested' only the males have crests, and then only during the spawning season. In early spring, the males develop a 'dinosaur-like' serrated crest along their backs and a much smoother crest along the tops of their tails. By early autumn, when they leave the water, the males have lost their crests and look much more like the females.

Populations of Great Crested Newts occur in Wales, England and Scotland. (They are not native to Ireland.)

This species is protected by British and European law which makes it an offence to kill, injure, capture or disturb them or to damage or destroy their habitat. If these newts move in to your garden pond, enjoy their company by all means, but be aware that it is illegal to sell them or to give them to a friend or a neighbour. (These rules apply not only to Great Crested Newts but also to their spawn or larval stages.)

Great Crested Newts spend much of their time on land, but between early spring and mid-summer you may find them in the weedy, shallow water at the margins of ponds, lakes and slow-flowing rivers. The eggs are laid in groups of two or three per day on submerged leaves and stems in pond margins between March and July. Just like other amphibians, young Great Crested Newts (known as 'efts') are born between late spring and summer. They live in the water, surfacing occasionally for air, until mid to late summer, whereupon they clamber out and live among the damp vegetation at the water's edge.

Like its smaller relatives, the Great Crested Newt feeds on all kinds of invertebrates and small fishes. Being so large, it needs a lot more food than either a Common Newt or a Palmate Newt, and so it is rare to find Great Crested Newts in acid moorland areas where food is scarce. They like vegetation-rich lowland ponds where there is plenty to eat while in the water and also during the pre-hibernation period out on land. Ponds with plenty of marginal vegetation suit it well, whereas most garden ponds, with lawns mown up to the edge, are much less likely to attract these large newts.

Pictures courtesy of the Countryside Council for Wales

Matching the Hatch by Pat O'Reilly (2017) - learn all about aquatic insects and other small water creatures that feature in the diet of newts.