Bulgaria - the flora and fauna of the Vitosha, Pirin and Rhodopi Mountain National Parks

Although relatively well known for its ski resorts, Bulgaria is seldom thought of as a destination in which to see wildlife and wildlfowers, and yet it has an abundance of both.

Black-veined White butterflies on flowers in the Vitosha National Park

Like other formerly Communist countries in Eastern Europe, Bulgaria has found the transition to capitalism much more difficult than expected. Many people live in a state of poverty compared to those in Western Europe, but the collapse of much of the industrial capability that Bulgaria attained during Communist rule, allied with their traditional farming methods, has paid dividends for the environment. In springtime the countryside is awash with the colour of haymeadows full of wildflowers and the many beautifully coloured butterflies, moths and other insects that thrive in them.

Up in the mountains, the springs and streams are pristine and the woodlands and forests are as Nature, rather than the forestry industry, intended them to be. For those interested in wildflowers and birds, Bulgaria must surely be one of the finest destinations in Europe.

Our visit took place in mid-June. We travelled through the meadows of the Vitosha Mountain National park and visited both the Pirin and Rhodopi mountain ranges. Many of the best wildlife sites coincide with the burgeoning ski-resort towns, so there is no shortage of high standard accommodation and food at very reasonable rates. Excellent Bulgarian wine is widely available and it reminded us of the time when, unlike now, we could buy it easily in our own supermarkets in the UK. 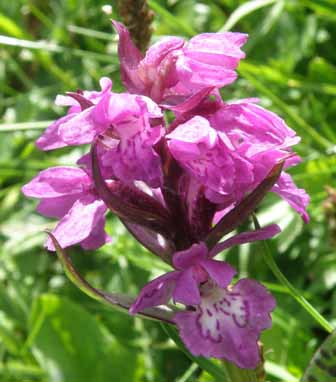 Heart-flowered Marsh-orchid, Dactylorhiza cordigera. It is the distinctly heart-shaped lip of the flower that gives it its name.

Excursions in this part of Bulgaria are accompanied by the song of many exotic birds including nightingales and hoopoes as well as the constant buzzing of the myriads of insects that visit the countless thousands of wildflowers that bloom in the meadows. Wildflower specialities in this area include the amazing blue and yellow flowers of Melampyrum scardicum, the Lizard Orchid (Himantoglossum hircinum) and many Balkan endemics.

Some of the more than 100 peaks in the Pirin Mountains

This is largest of the national parks in Bulgaria and has more than 100 mountain peaks covering in excess of 40,000 hectares. Both acidic and calcareous exposed rocks occur there, and so the diversity of wild plants in the region is quite considerable. During our visit we found many orchids including Heart-flowered Marsh-orchid (Dactylorhiza cordigera) and Gymnadenia frivaldii - a diminutive Balkan endemic that we discovered flowering in a marshy flush beside a river. Other lovely finds included Digitalis lanata, a foxglove with red-veined, ochre-coloured flowers with whitish lips, and the captivating true Oxlip, Primula Elatior. 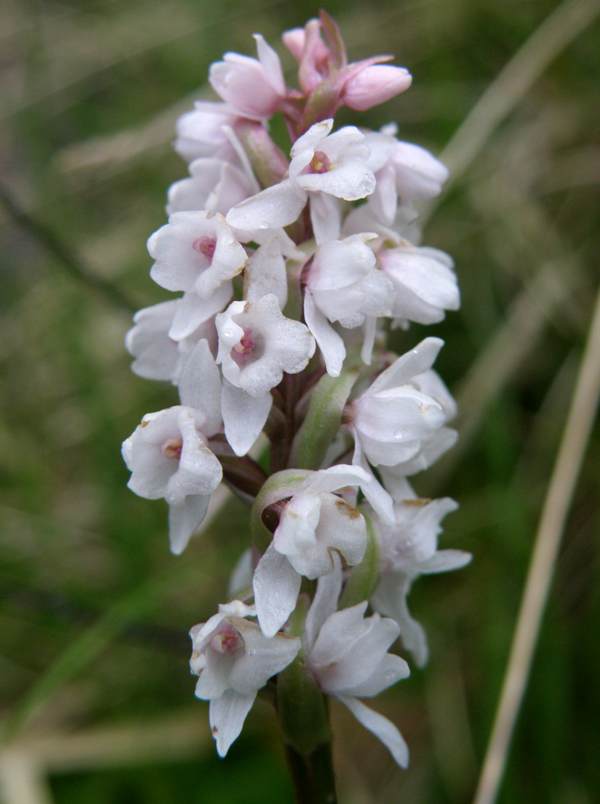 For many, the highlight of a visit to this part of Bulgaria must be the opportunity to see the extremely rare endemic, Haberlea rhodopensis and some of the many orchids that occur in the Rodopi Mountain-range National Park. The Red Helleborine, Cephalanthera rubra, is relatively free-flowering on the wooded roadsides in the mountain gorges, while in meadows in the foothills of the Rodopi range, are the Bug Orchid, Anacamptis coriophora,Greater Butterfly-orchid, Platanthera chlorantha, the gorgeous Lax-flowered Orchid Anacamptis laxiflora, and many others including the Fragrant Orchid Gymnadenia conopsea in both its pink and white forms.

We have a particular interest in wild orchids and the many rare and interesting species found during our visit were a revelation. Elder-flowered Orchid, Dactylorhiza sambucina was another Rodopi Mountain-range species, and In some parts of the mountains the roadsides are lined with Dactylorhiza saccifera, a close relative of our own Common Spotted-orchid, Dactylorhiza fuchsii.

A pristine stream runs through a gorge in the Rhodopi Mountains

For those with a particular interest in wildflowers, Bulgaria is a tough destination to beat: the traditional farming methods still used in much of Bulgaria mean that the delicate species of wildflowers so sensitive to the agricultural chemicals used throughout so much of Europe today still survive in abundance in Bulgaria. The National Parks are full of magnificent wildflower meadows, many of which are easily accessible.

Bulgaria is a beautiful country to visit with safe and comfortable accommodation widely available. The Bulgarians themselves are friendly and helpful and they are pleased to welcome people who enjoy the unique and wonderful wildlife that can be found throughout their lovely country.

If you prefer to go on an accompanied tour a number of wildlife travel companies run tours to Bulgaria including Naturetrek.