The grayling is an unusual fish. Its adipose fin - the little rubbery one just forward of the tail - identifies it as a game fish, and yet it insists on spawning in the spring and early summer, as the coarse fish do. The scientific name comes from a reputed herb-like smell associated with grayling; to most people, however, they smell like fish!

The British rod-caught record grayling was caught in 2009 by Paul Mildren while fishing on the River Frome, in Dorset; it weighed a hefty 4lb 4.5oz (1.9kg). 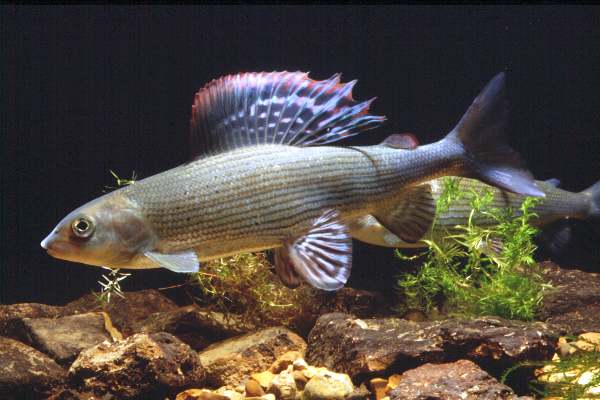 Grayling are not native to Welsh rivers, but where they have been introduced they tend to do very well. The Welsh Dee, the Wye and the Severn are all noted grayling rivers in their middle and upper reaches.

Grayling to nearly 4lb (1.8kg) have been caught in recent years from the Wye, while the Welsh Dee is rated as one of the finest grayling rivers in Europe. In recent years, as salmon stocks have declined, grayling appear to have found the Welsh rivers ever more to their liking. Fish of over 2.5 lb (1.1 kg) are now very common.

Even some of the South Wales Valleys rivers - the Taff and Ogmore, for example - can now provide exceptionally good grayling fishing. The best time is from late August until the end of January.

With the exception of a small stretch of the River Teifi, near Llanybydder, there are no grayling in the West Wales rivers, and neither are there any in Gwynedd.

If you found this information helpful, you would probably find the new 2017 edition of our bestselling book Matching the Hatch by Pat O'Reilly very useful. Order your copy here...