This perennial wildflower is common only in the western part of Britain and is found throughout Ireland. Wall Pennywort also thrives in warmer climates, including the Algarve region of southern Portugal.

The stalked fleshy succulent leaves, most of which grow as a basal rosette and range from 1 to 8cm in diameter, are round and often have slightly scalloped edges, The name Pennywort refers to the shape and typical size of the leaves and refers to a pre-decimal penny, of course! Each leaf has a shallow central depression - hence one of its other common names, Navelwort. The five-petalled tubular flowers grow along a stout stem, and they open from the bottom of the spike. Flower spikes up to 25cm tall are quite common, although a height of 10 to 20cm is more typical. Older plants may produce several flower stems.

This succulent plant, a member of the Stonecrop family, has its leaves joined into a tube. Navelwort, also known as Wall Pennywort, is commonly found on walls and steep banks, especially in permanently damp, shaded areas.

Above: pinkish bell-like flowers of Wall Pennywort. This is just about as wide open as they get.

When exposed to sunlight and drought theleaves curl up and the stems and flowers turn reddish, while in damp shaded locations the whole plant retains its green colours.

In shady situations, palid spikes of bell-shaped flowers of the navelwort first appear in May, and the green fruits ripen and turn brown through the summer months. 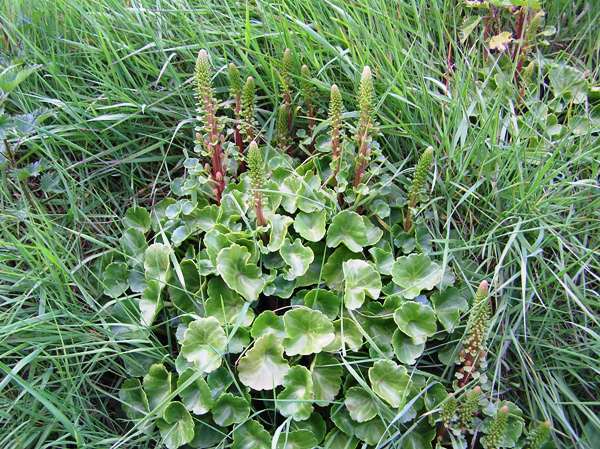 Wall Pennywort grows on damp coastal cliffs, on roadside banks, near the trunks of large trees and particularly from crevices in garden walls and field boundary dry-stone walls.

In Britain and Ireland Umbilicus rupestris can be seen in flower during May, June and early July. The dried stems with their brown fruits persist through summer and autumn, occasionally remaining intact as new flower spikes start to emerge in the following springtime.

In southern Europe, Wall Pennywort can be seen in flower from the start of the calendar year, and the fruits have usually ripened by early April.

The plants shown above on this page were photographed in Wales during June and July, while the picture below, taken in March, shows Wall Pennywort growing on a farm roof in the Algarve region of southern Portugal

The leaves of Wall Pennywort can be found throughout the year, and some people use them in salads; they taste rather like salty lettuce but have the sweetness of melon or, some say, cucumber.

Marsh Pennywort, Hydrocotyle vulgaris, is not a close relative of Wall Pennywort although it has similar belly-button-like leaves.