The Zoned Tooth is an uncommon to rare woodland mushroom and, as with other Hydnellum species in Britain, it is a Biodiversity Action Plan (BAP) species. It seems likely that in Britain there are at least two species hidden under this scientific nanme. In Scotland, the Zoned Tooth often occurs under conifers such as pines (Pinus spp.) or spruces (Picea spp.), whereas in southern England this hydnoid mushroom is found mostly in broadleaf woodland under Beeches (Fagus spp.) and Oaks (Quercus spp.) but also occasionally in mixed broadleaf/conifer woodland.

When in conifer woodland, Zoned Tooth fungus blends in with (and often engulfs) needles on the forest floor and so can easy be overlooked. Although very variable in cap shape and colour, the gregarious fruitbodies tend to fuse together and can form quite large masses with several stems. 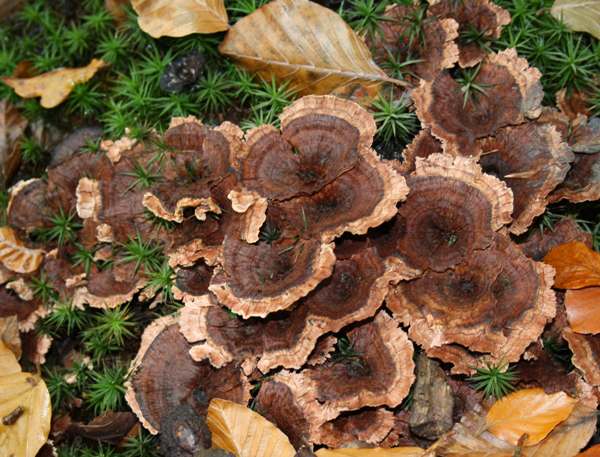 In Britain Hydnellum concrescens is reported mainly from southern England and from Scotland. This species is recorded from many European countries and from parts of North America and Japan.

Tooth fungi of various kinds can be found in many taxonomic orders, and over the years their classification has changed considerably. The basionym of Zoned Tooth was set in 1796 when this species was described scientifically by Christiaan Hendrik Persoon, who gave it the binomial name Hydnum concrescens. The currently-accepted scientific name of this fungus dates from 1906, when American mycologist Howard James Banker (1866 - 1940) transferred this species to the genus Hydnellum.

Hydnellum, the generic name, is derived from the ancient Greek word hudnon, meaning an edible mushroom; this term was applied particularly to edible truffles. (See, for example, Tuber melanosporum, the Perigord Truffle.)

The specific epithet concrescens means congealed - a reference to the habit of Zoned Tooth fruitbodies of merging and fusing together to form large compound ground-hugging fruitbodies.

In Britain this 'hydnoid' (toothed) fungus is a Biodiversity Action Plan (BAP) species.

Zoned Tooth is a tough and insubstantial fungus. The fact that the fruitbodies are long-lasting suggests that other creatures also find the Zoned Tooth hard to chew and swallow (although it is possible that these fungi contain chemicals that grazing animals do not like). Needless to say we have no recipe information for this species.