We saw our first Caribbean Buckeye in Barbados, and the only similar species that we had seen was the Common Buckeye, Junonia coenia, which is a common butterfly throughout much of the USA.

Also referred to as the Tropical Buckeye, this lovely lowland butterfly has a wingspan range between 4.5 and 5.7 cm.

Junonia genoveva, which feeds on Black Mangrove, Avicennia germinans, is very similar and is often confused with Junonia evarete, as the ranges and habitat preferences of these two species are also very similar. Seen from underneath, the antennal club of the male of J. evarete is pale (much the same same color as the rest of the antenna seen from below), whereas the underneath (ventral) surface of the club of J. genoveva is dark. Differences between females are even more subtle and less reliable! Note also that many fairly recent fieldguides transpose these two species and their descriptions.

Above: a male Caribbean Buckeye.

This butterfly is common in the Caribbean, and it is thought to occur along the eastern coast of America from Texas down to Brazil, limited by the availability of its larval foodplant. 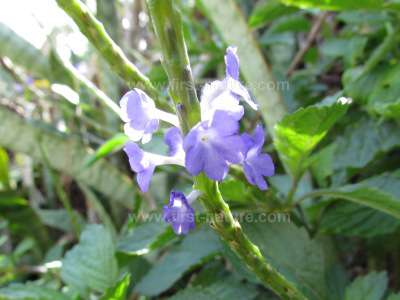 The larval foodplant of the Caribbean Buckeye was formerly reported to be Black Mangrove, but recent reports indicate that confusion between J. genoveva and J. evarete may have been the cause of this error. The Caribbean Buckeye, Junonia evarete, is now known to use Blue Porterweed, Stachytarpheta jamaicensis (pictured above) as its main larval foodplant. The plant shown here was photographed on the island of Barbados, where we also found the specimens of Caribbean Buckeye pictured on this page.

On mainland North America this butterfly is reported to produce three to four broods between March and October; it overwinters as an adult butterfly.

If you found this information helpful, you would probably find the new 2017 edition of our bestselling book Matching the Hatch by Pat O'Reilly very useful. Order your copy here...