When seen at rest, when its wings are nearly always held wide open, the Spanish Festoon is a truly magnificent sight. Often the red patches on the wings are more strident than those on the specimen shown here, and that clearly distinguishes it from the Southern Festoon, which occurs in France and other parts of central Europe. (The Southern Festoon has virtually no red on its forewings and, unlike the Spanish Festoon, it has blue on its hindwings.)

Apart from the south of France, in Europe this colourful butterfly is confined to Spain and Portugal; its southern range extends well in to the northern countries of Africa. Its preferred habitat is scrubby grassland and woodland clearings. 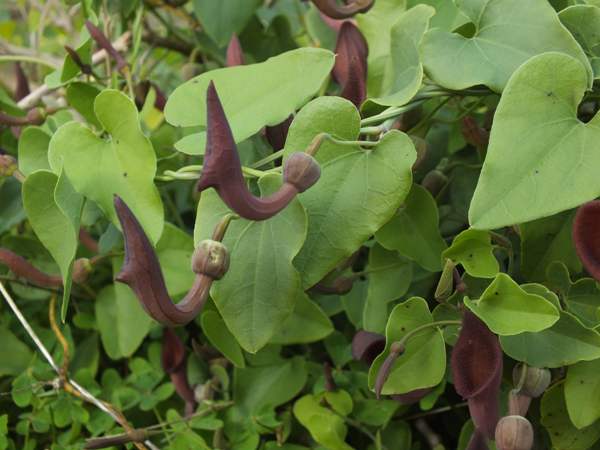 The larval foodplants used by the Spanish Festoon are various Aristolochia species. In the Algarve we find them in areas where Aristolochia baetica grows - see picture, left. This remarkable plant goes by the common name of Dutchman's Pipe.

Adults are on the wing mainly in April and May, although there have been reports of an autumn brood in some areas; they fly fairly slowly over herb-rich grassland, pausing briefly to take nectar from wildflowers.

On bright spring days we have seen them resting with open wings on leaves of track-side shrubs and occasionally also on the bare surfaces of stony woodland tracks.

If you found this information helpful, you would probably find the new 2017 edition of our bestselling book Matching the Hatch by Pat O'Reilly very useful. Get an author-signed copy here...