The Sycamore is a member of the maple family, known formally as the Aceraceae. (The Latin genus name Acer means sharp, and is a reference not to the form of the tree itself but to its timber. Wood from maple trees, including sycamores, was used for making spears.) In spring the young Sycamore leaves are rich red or orange (see the picture, below), but in autumn they cannot match the vibrant red, orange and yellow colours of other kinds of maples.

Sycamores may have reached Britain (from southern Europe) as early as Roman times, although they seem to have been scarce here until the late eighteenth century.

In suitable locations, Sycamore trees can attain a spread of 30m and grow up to 40m tall. The distinctive flowers are pollinated by insects, which is not the norm for trees most of which rely on wind for pollination.

Bark of an old Sycamore

In summer winged seeds appear, green at first but turning brown as they ripen. In autumn, as the seeds fall from the trees on breezy days their wings cause them to spin like helicopter blades, and so they are carried away from the parent tree by the wind. In spring its young leaves are often a lovely red or orange colour; however, in autumn sycamores cannot match the colours of other maples.The bark is sometimes the most attractive feature of this tree, as its patchy surface colours can include various shades of pink, brown, grey and ochre.

These tough trees cope well with wind exposure, salt-laden air, and even industrial pollution. Creamy white and hard, Sycamore timber can be planed to a smooth finish, making it a useful furniture and flooring material.

Wavy-grained Sycamore, known as fiddle-back wood, is still used today in the crafting the soundboxes of top-quality violins.

Seen close up, the flowers are quite distinctive as well as being rather intricate and very beautiful. So also are the seeds, which have wings and tend to rotate like helicopter rotor blades as they fall to the ground in autumn.

Creamy white and hard, Sycamore timber can be planed to a smooth finish, making it a useful furniture and flooring material. Wavy-grained Sycamore, known as fiddle-back wood, is still used today in the crafting the soundboxes of top-quality violins.

The invasive behaviour and exotic origin of Sycamore do little to endear it to nature conservationists, who make vigorous efforts to control and eradicate it. Fungi hunters rarely enthuse about these trees either, because Sycamore woodland in autumn certainly can have the appearance of a mycological desert. 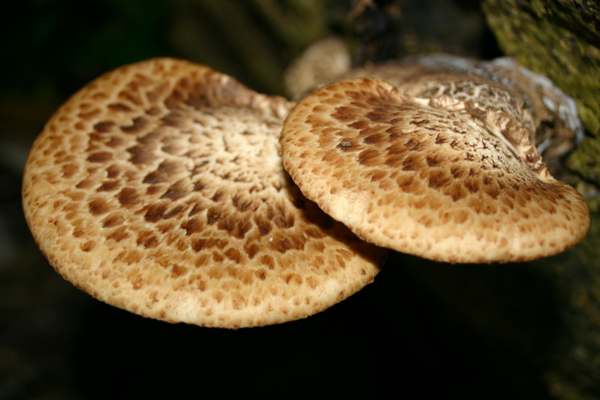 These ubiquitous deciduous broadleaf trees have very few ectomycorrhizal (EM) fungal partners. So, although they have AM fungal associates and they certainly do provide food for insects, for some parasitic fungi (in particular the Dryad's Saddle bracket fungus, Polyporus squamosus) and for rather more litter-recycling species, from a fungi foray point of view Sycamores are among the most boring of woodland and wayside trees. They are not alone in this respect, however; for example the Ash is equally standoffish towards EM fungi.

Tar Spot, Rhytisma acerinum appears on the leaves of Sycamores and other maples from late spring onwards. Although it must reduce the effective surface area available for photosynthesis, this parasitic fungus seems to have little or no effect on the health of the trees themselves. The fungus remains dormant on fallen dead leaves through the winter months, springing into action and spreading its spores in springtime when there are new leaves available for it to infect.