These splendid trees, native to northern Greece, were introduced into Britain from Turkey in the 17th century. The soft timber of Horse Chestnut trees is not much used, but the shiny mahogany-brown fruits of the horse chestnut are prized by children and used for playing 'conkers' – a tradition at least 200 years old. These nuts, which develop in spiny cases, are ripe in September and October (the 'conker' season).

Horse Chestnut trees growing in the open can reach a height of 35m, but unfortunately in recent years disease has caused ‘die-back’ of many of our finest old Horse Chestnuts.

The bark of a mature Horse Chestnut tree is quite similar to that of a Sycamore, but the trunk is often more deeply fluted, as in the example pictured below.

In winter and early spring Horse Chestnut buds develop and swell. Commonly referred to as 'sticky buds', they are extremely sticky - a feature that helps to prevent damage by small insects, many of which get trapped on the gluey surface of the buds. The distinctive palmate leaves usually have five or seven leaflets

Horse Chestnut trees are less plentiful in the wild in Wales and western England than they are in the southeast of England, but in town gardens and parks throughout Britain and Ireland these imposing trees have been planted for their beautiful forms and colourful springtime displays of blossom.

You can see a lot of conker trees in the upper Severn Valley, where many of the finest old trees are conveniently close to towns and villages. The ground beneath them is much trodden by young feet in the conker season. 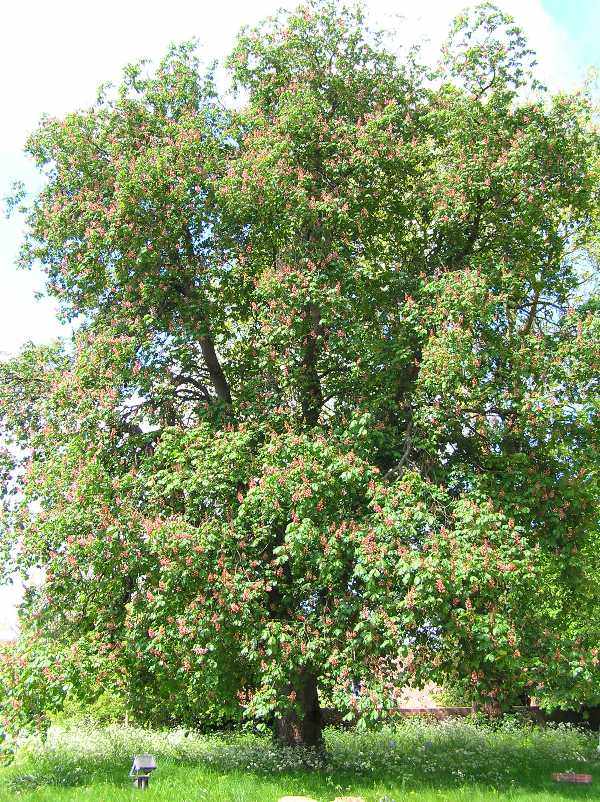 A related North American species has red flowers; its glossy nuts peering from split spiny cases have earned it the nickname of Buck-eyes. Pink- and red-flowered Horse Chestnut trees seen in Britain and Ireland are hybrids between ‘our’ Horse Chestnut and Buck-eyes.

There are many cultivated variants of this popular ornamental tree including Aesculus x carnea, a fertile hybrid that does not grow as tall as the white-blossomed variety. As its scientific name implies, this particular tree has bright red blossom. 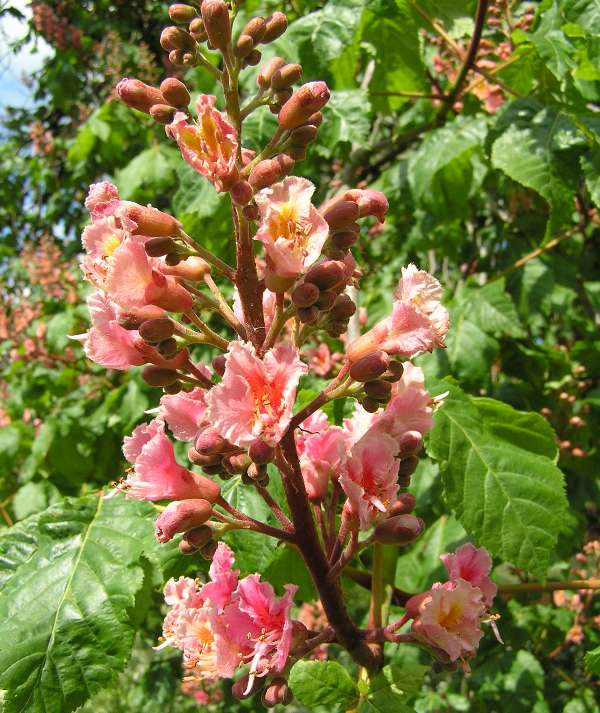 This is another of the handful of common broadleaf deciduous trees that form mainly arbuscular mycorrhizal (AM) associations with fungi, and in Britain and Ireland they have no known ectomycorrhizal (EM) partners. Bracket fungi such as the Dryad's Saddle bracket fungus, Polyporus squamosus and Beefsteak Fungus (Fistulina hepatica) are sometimes found on old Horse Chestnut trees.