Despite its distinctive colouring the rare and very shy Sand Lizard is seldom seen in Britain.

At up to 9cm in body length and more than 20cm from head to tail, the Sand Lizard is actually quite a bit bigger than the Common Lizard, Lacerta vivipara. The mle in its breeding colours is particularly brightly coloured, with attractive occeli (eye-shaped markings) and green flanks. 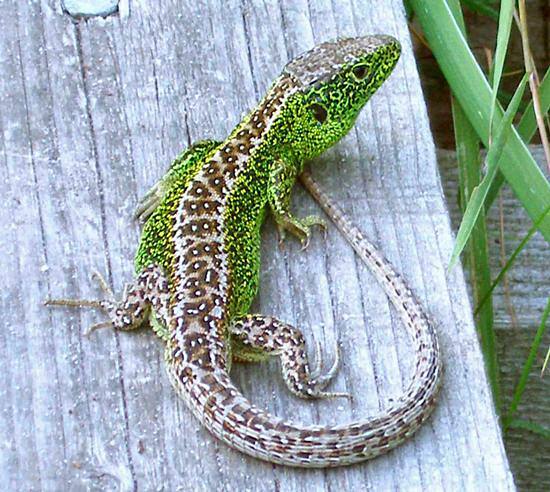 Thanks to a reintroduction programme in southern Britain, this lovely lizard is now found in a few coastal sand dunes, although there are also native Sand Lizard colonies in a few sandy heathlandsites in Surrey, Hampshire aand Dorset (southern England). Sand LIzards are far more common in parts of eastern Europe.

Unlike many other reptiles, the Sand Lizard is oviparous rather than vivaporous. Emerging from hibernation in March or early April, after mating the female lays her eggs under a shallow layer of sand. The eggs are simply left to hatch by the warmth of the summer sun, and the juveniles, typically 6cm long, emerge in August or September.

During the day, Sand Lizards feed on insects and other small invertebrates; by night they rest in shallow burrows dug in the sand.

Habitat loss is generally considered to be the main cause of the decline in numbers of Sand Lizards. The natural populations were apparently lost from the sand dunes of North Wales and Merseyside and from the New Forest, although programmes of work to reintroduce them have provided encouraging results in recent years; and a re-introduction to the Inner Hebrides in the early 1970s appears to have resulted in a self-sustaining population.

Above: the Fringe-fingered Lizard Acanthodactylus erythrurus is a southern European reptile of sandy coastal habitats.

As the common name implies, the habitat needs of these lizards are for dry sandy places such as sand dunes and sandy heathland. Many sites of suitable habitat in Britain have been damaged or destroyed in recent times.

The Wildlife and Countryside Act provides very strict protection for this lizard, which in Britain is considered to be threatened with extinction. If you come across Sand Lizards you are not allowed to handle or even disturb them.

Matching the Hatch by Pat O'Reilly (1997) - learn all about aquatic insects and other small water creatures that feature in the diet of reptiles.

This page includes pictures kindly contributed by The Countryside Council for Wales and by Bob Osborne.